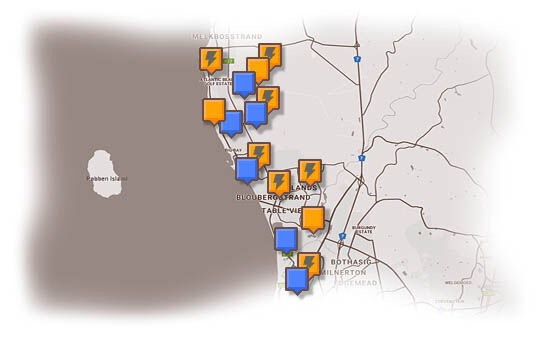 The magic of Cape Town lies in the fact that, whichever direction you travel, you are bound to reach somewhere of unspeakable beauty, with views extending across crisp oceans and white sandy beaches, with blue mountains towering in the backdrop. And so it is for Cape Town’s Blaauwberg region.

The area is named after the nearby mountain – translated as ‘Blue Mountain’ – and is home to Bloubergstrand, a long sandy beach that is very popular with kitesurfers and windsurfers. Although many might not want to brave the icy waters of the Atlantic Ocean, this beach is superb for sundowners, particularly in summer when it’s light much later.

Renowned for its ‘classic’ view of Table Mountain, seen in postcards, adverts and even onscreen, Blaauwberg is a residential suburb located just 30 minutes from the CBD. In addition to the mountain view, visitors to this seaside spot will be able to see the historically-significant Robben Island, the prison which held many Apartheid-era activists, among them former president, Nelson Mandela.

While the existence of a beautiful nature reserve alongside a power station might seem impossible, Koeberg Nature Reserve, just off the R27, is just that. Based in Melkbosstrand, the Koeberg Nature Reserve is a stunning hiking spot, offering views of the West Coast strandveld, duineveld and includes a 2-kilometre beach hike. This site is particularly popular come springtime when the wildflowers are in bloom and 153 species of birdlife abounds. You can expect to find any number of wild animals, including Grysbok, Steenbok, Bontebok, Springbok, Caracal, the African Wild Cat, Grey Mongoose and Genet. Look overhead and you might catch site of the resident African Fish Eagle. The two available hiking trails are the 13-kilometre looped Dikkop Trail and the less strenuous six-kilometre Grysbok Trail.

As with so many regions across the Cape, Blaauwberg offers visitors seemingly endless wining and dining options, most of which have spectacular ocean and mountain views to accompany the gourmet cuisine. One such restaurant is Café Blouberg, with its easy-style food, views of Robben Island and Table Mountain… it’s worth a stop. Another fine-dining venue is the Blue Peter Hotel, characterised by its white lines, blue trim and ocean backdrop, all of which give it a really traditional seaside-holiday look and feel. Sample some of the restaurant’s mouth-watering Cape cuisine, including seafood straight from the ocean, all prepared by a master chef.

If you’re looking for some exercise in a well-landscaped area, then try a round of golf at Atlantic Beach Country Club in Melkbosstrand. The 18-hole, links-style golf course is suited to all handicaps and offers several great meal options at the club house as well.

And, if you’re in the area, why not stop by for some high-flying entertainment and historical artefacts at South Africa’s second largest military aviation museum – The South African Air Force Museum in Ysterplaat. Since 1973, this site has been the custodian of the national military aviation history, preserving the air force’s legacy dating back to the 1920s. All the museum’s exhibits are put together by a team of permanent force, citizen force and civilian members. If you’re lucky enough to be visiting at just the right time, you might catch the impressive air show which the museum organises twice a year.
View Town List
Shows all the towns with accommodation
View $elect Stays List
Shows listings offering a 15% discount to members